We caught up with Hamish post event to find out more about his running life and why he believes in supporting medical research:

I started athletics when I was six but only got into it seriously when I started college - before then I'd been much more interested in skiing! When I was 12 I lived down in Wanaka and did a season of cross-country skiing and got really fit, so to start with running was just a way to keep fit when there was no snow around.

These days I run both because I love the competitive aspect and because it's so enjoyable being fit and able to run through the wilderness on long training runs. Thus far my main achievements have been winning two NZ senior 1500m titles and one 3000m title so to add the half marathon title to that was a bit of a surprise.

I've represented New Zealand once before in 2011 in the 1500m at the World University Games in China where I finished 10th. I was hoping to qualify for the Olympics last year but missed out on the selection standard of 3.35.5 by 2.5 seconds. Hopefully I can make it to Rio and the Commonwealth Games in Scotland next year.

I entered AMI Round the Bays through the Malaghan Institutes limited Run for Research entries and was really happy to support medical research by entering the event. I became familiar with the Malaghan Institute when I started studying at Victoria University in 2007 and in my opinion scientific research in general deserves more support because it leads to knowledge that benefits people in their everyday lives. 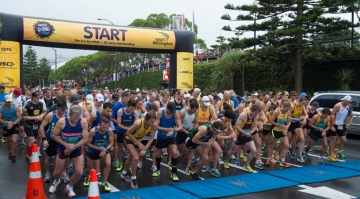 It was great to see so many people taking part in AMI Round the Bays this year. Keeping active is so important to leading a healthy life and everyone I saw out there seemed to be having a great time. The cheers from the other runners and walkers coming around the peninsular really spurred us leading guys on running into the head wind on the way to the finish.

Having never raced a half marathon before I wasn't quite sure what to expect but I soon settled in to the pace and was able to hang in there despite numerous surges from Dr Dougal Thorburn and out sprint him in the last couple of kilometres. I felt pretty good at the end but it was a long way and don't think I'll be running a full marathon any time soon!

Thanks Hamish for supporting the Run for Research and congratulations on a fantastic achievement!

For those of you interested in seeing Hamishs personal bests  have a look at these speedy times:

Results from AMI Round the Bays 2013:

Thanks to everyone who came along to our tent on race day and took part in our little...