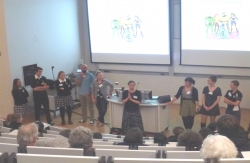 This year we celebrated the 2014 World Day of Immunology by rigorous debating of the moot: the bugs have won!

The two debating teams were comprised of senior scientists, PhD students and secondary school students, who spent the month of April preparing to battle for the supremacy of bacteria or the immune system.

While both teams fought valiantly, in the end, the audience decided that the bugs had NOT won and the immune system was doing its job (but it was very close!).

The debate was held on 5 May 2014 at Rutherford House, Victoria University of Wellington. Our courageous debating team members were:

The affirmative team highighted the growing incidence of antibotic resistance and the different strategies used by bacteria to evade the immune system.

The negative team provided compelling evidence of the different ways the immune system combats harmful bacteria, while also protecting those bacteria that live within us and support good health.

Overall the event was a great success and we look forward to future opportunities to engage with the public in raising awareness of the extraordinary potential of the immunology research being undertaken right here in New Zealand and across the globe.