Home > News & reports > News > Turning an obstacle into an opportunity

As often happens in science, a stumbling block in one area of research can present a solution for another.

The collective insight and creative thinking of our researchers has turned a potential bottleneck in cancer immunotherapy into a new way of treating diseases such as asthma and allergy.

The dendritic cell vaccines we use in our cancer research are designed to drive powerful immune responses against a growing tumour. The critical cancer-killing cells activated by the vaccine are specialised white blood cells called cytotoxic T lymphocytes (CTL). What Professor Franca Roncheses and Associate Professor Ian Hermans research revealed however, is that the activated CTLs not only attack tumours, they can also kill the dendritic cells in the vaccine itself!

Although this presented somewhat of a problem for the cancer vaccine, it raised the possibility that dendritic cell killing could be used to advantage in diseases where we want to shut down an overactive immune response  such as asthma and allergy.

At the time of this research, the scientific literature was reporting that in addition to the known abilities of CTLs to kill cancer cells, or cells infected with viruses, they could also reduce the symptoms of asthma in experimental models  the scientists just didnt know how or why. It was Professor Roncheses team, specifically Dr Noriyuki Enomoto and PhD student Naomi Daniels, that provided the possible answer  CTLs can also kill dendritic cells in the airways and in doing so, change the outcome of the asthmatic immune response.

This discovery has opened the doors to the development of a vaccine treatment for asthma that manipulates dendritic cell survival, by specifically targeting CTL activation. We will update you on the progress of this promising new research in a future issue of Scope. 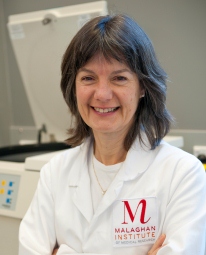 Driven by her passion for immunology and unwavering positive spirit, Professor Franca Ronchese was responsible for establishing New Zealands first cancer immunotherapy programme here at the Malaghan Institute in the early 1990s.

Her pivotal observation at the time that she could programme the immune systems of mice to target tumours using specific dendritic cell vaccines, garnered the interests of scientists and clinicians alike. Since then Franca has led the Immune Cell Biology programme at the Malaghan Institute, investigating the basic biology of dendritic cells and how they can be used to best advantage in immunotherapies for cancer and allergic disease.

When Franca first started on this journey two decades ago, she had a goal and the intellectual know-how to see it realised, but securing research funding, establishing the necessary experimental techniques and engaging clinicians willing to trial immunotherapies, were all major obstacles she had to overcome along the way.

With the US Food and Drug Administration approving the worlds first cancer vaccine in 2010, with several others since and more in the development pipeline, it is poignant to note that through Francas vision, New Zealand can count itself alongside the forerunners of this groundbreaking new form of cancer treatment.

This article features in the May 2014 issue of our Scope newsletter (Issue 53).  Download the full newsletter here - 506 KB (PDF)