Immunity - the battle within

Did you know that your body is constantly at war? At war with germs that is! Our scientists believe that unravelling the many battle secrets of the immune defence system  and its vulnerabilities  will enable us to more effectively treat diseases such as cancer, asthma and allergy, arthritis, MS and infectious disease.

Viruses and bacteria are everywhere around us  they are in the air we breathe, on the surfaces we touch and sometimes in the food we eat. Usually however, we stay well and are not even aware that there is a battle taking place beneath our skin. This is because our immune system acts as our own personal defence force, utilising its intricate network of organs, cells and proteins to protect us from the billions of germs that we are exposed to every day.

Here at the Malaghan Institute, we believe that by unlocking the secrets to controlling immune responses, we can develop more effective and natural therapies for treating disease. Before we can develop ways to best exploit our immune system to treat disease however, we first need to understand how the different cells and proteins work together to generate an immune response. 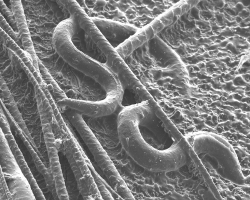 The parasitic worm Nippostrongylus brasiliensis crawling through the hairs on skin.

Think of your body as an isolated fortress that is constantly under attack from hostile foreign armies of viruses, bacteria and parasites. These germs want to invade your body to use its resources for their own purpose, potentially harming you in the process. The term foreign is often used by scientists to describe invading germs or other substances not normally found in your body. In addition to the enemy being anything that is not us, such as germs, it can also be things that are no longer us, as happens in cancer.

Germs and cancer have substances on their outer surfaces that are not normally found in the human body. These foreign substances, called antigens, raise an alarm that causes the immune system to react.  The true power of our immune system comes from its ability to remember invading germs that it has fought in the past and is therefore able to strike more quickly if they attack again. When this happens, the body is said to have immunity.

The immune system is much better at recognising and attacking germs than cancer because cancer cells originate from within the body and are often not seen as foreign. This is thought to be why cancers are often able to grow, despite the presence of a healthy, working immune system. So instead of thinking as cancer cells as an invading army, they could be considered as more like traitors operating from within.

The response to antigens is a highly coordinated process that uses the many types of cells of the immune system to defend, attack, control and provide long-term security against future invasion. Immune cells are white blood cells that are produced in large quantities in the bone marrow. There are a wide variety of immune cell types, the most important of which is the CD4+ T helper cells.

The General and the Assassins 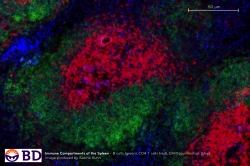 The CD4+ T helper cell acts as a General, directing the other immune cells in the tasks they have to perform. The primary role of CD4+ T helper cells is to trigger the activation of B cells and killer T cells. The command centres for this information transfer are the lymph nodes and spleen.

In response to specific commands from CD4+ T cells, B cells release special proteins called antibodies that act like smart bombs, specifically targeting a particular intruder and marking it for destruction.

The assassins of the immune system are the cytotoxic T lymphocytes (CTL) and natural killer T cells (NKT). Upon instruction from CD4+ T cells, these killer cells will seek out and attack cells of the body infected with viruses or cancer cells. When these killer cells come into contact with foreign or cancerous cells, they give off substances that destroy them.

Another important role of the General is to stimulate the activity of regulatory T cells. These cells act as brakes to help keep the immune system in check. Autoimmune diseases such as multiple sclerosis can arise when these cells do not work correctly.

Sometimes the General can get it wrong and mistakenly direct immune responses against harmless substances such as pollen or certain foods, resulting in the diseases asthma and allergy. At the Malaghan Institute we have research programmes dedicated to understanding how and why this happens, so that we can apply this information to the development of effective therapies for the treatment of these diseases.

T cells need help to recognise and respond to germs, so like a General in his war room, the CD4 T cell must rely on his aides to provide him with the who, what, and where of potential threats.

The most powerful aides are a rare group of immune cells called dendritic cells, which patrol the body like sentinels, alerting the immune system to germs and potential threats. If the dendritic cell comes into contact with a foreign invader or cancer cell, it captures it and travels to the nearest lymph node command centre to present its captive to the CD4 T cells. The CD4 T cell will then process this information and decide on the appropriate course of action.

Dendritic cells form the basis of cancer vaccines being developed at the Malaghan Institute to treat cancers such as glioblastoma multiforme (brain tumour) and melanoma. The dendritic cell vaccines are generated from a patients own dendritic cells and tumour tissue and are designed to stimulate the patients killer T cells to seek out and destroy their cancer. Cancer immunotherapy is emerging as one of the most promising alternative approaches to cancer treatment and has the advantage of minimal side effects to the individuals being treated.

Other key contributors to the immune response are neutrophils, macrophages, basophils, mast cells and eosinophils, which travel throughout the body in pursuit of invading germs and either devour any foreign invaders they come into contact with, or release substances that kill them.

This is just a glimpse of our immune system and the intricate ways in which its parts interact. Immunology is a fascinating area that still holds many secrets, which our scientists are working hard to discover.