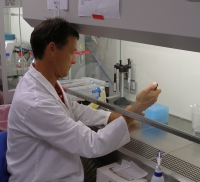 After almost 11 years at the helm of the Multiple Sclerosis Research Group, Associate Professor Thomas Bäckström (pictured left) is leaving the Malaghan Institute to take up a position at Novo Nordisk in Denmark. Novo Nordisk is a world leader in diabetes care, producing insulin for half of the European and USA diabetic markets. In his new role Assoc Prof Bäckström will head Novo Nordisks T cell Biology Department, providing the potential opportunity for the development of close linkages between the Malaghan Institute and one of the worlds major pharmaceutical companies.

Since his arrival at the Malaghan Institute in 1997 from Sweden, Assoc Prof Bäckström has worked tirelessly to establish the laboratory models and technology required to study this most complex of diseases. In individuals with multiple sclerosis (MS) the bodys immune system attacks the myelin tissue of the central nervous system, disrupting the brains ability to control such functions as seeing, walking and talking. Scientists do not yet know what triggers the immune system to do this.

Some of the highlights of Assoc Prof Bäckströms research include the establishment of the EAE (experimental autoimmune encephalomyelitis) model to study multiple sclerosis; the discovery that the symptoms of disease in the EAE model can be improved through the use of specially designed immune-modifying therapeutic agents; and that the activity of immune cells called regulatory T cells, play a crucial role in determining this outcome.

We will very much miss the passion and intellectual insight that Assoc Prof Bäckström has brought to the Malaghan Institute and the NZ health research scene and sincerely thank him for the significant contributions he has made to MS research in this country.

Assoc Prof Bäckströms departure does not mean an end to MS research at the Malaghan Institute. It is with great pleasure that we announce that the MS research mantel is to be handed over to Dr Anne La Flamme (left), a senior immunologist from Victoria University that has been a research consultant of the Malaghan Institute since 2001 and has published alongside Assoc Prof Bäckström on several pivotal research discoveries. Dr La Flamme has a particular research interest in macrophages, an immune cell type that plays a critical role in regulating the immune responses in the EAE model, and schistosomiasis, a parasitic disease that appears to offer protection against the development of MS.

With Dr La Flamme on board the Malaghan Institute will be able to continue the leading-edge research pioneered by Assoc Prof Bäckström, thus ensuring out commitment to understanding both the causes of MS and the development of immunotherapies to halt its progression.

Media Release: Working towards a cure for Multiple Sclerosis

There is currently no cure for Multiple Sclerosis (MS) - however scientists at the M...