With just a few days remaining before the sell out AMI Round the Bays on Sunday 23 February over $30,000 has been raised by more than 230 wonderful people who have joined the Run for Research!

Every donation is getting us closer to reaching our $50,000 goal so don't forget to sponsor a friend, Malaghan scientist or our Ambassador Jason Pine for their efforts!

AMI Round the Bays has now sold out with a record 14,000 people set to flood the streets on Sunday! If you have missed out on registering we have a limited number of special Run for Research entries available - find out more here!

Good luck to everyone involved for a great day at Wellington's biggest ever fun run!

Congratulations to those who have joined the $1,000 club!

We want to say a very big congratulations to the following people and teams who have raised over $1,000 so far! 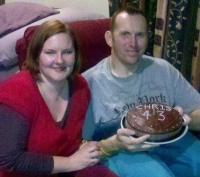 Last year Caroline Donovan managed to fundraise nearly $500 in the Run for Research and this year she reached her goal of $750 so fast that she decided to double it to $1,500 - and has almost reached $1,000 in donations! Caroline says she found out more about the work Malaghan did after her friend Chris passed away from metastatic melanoma two years ago not long after his 43rd birthday. He was a wonderful person, loyal to his family and friends, full of integrity and gifted in imparting wisdom in a few words. I decided to do it again in memory of Chris, and for the potential for the research to help others the way it helped him. This year Caroline says she has also decided to raise money a little differently, by earning donations from people by offering her time. This includes offering to mow lawns, weed gardens, stack wood, babysit and much more.

One of Caroline's most successful fundraising ideas to date has been the launch of the Lady Lemon brand producing lemon curd in a range of flavours. Caroline will have a fundraising stall selling the lemon curd at the City Markets on Sunday 9 March - why not pop down and see her! "Every dollar counts and collectively we can make a real difference," says Caroline. "So just remember to give it your best and have some fun in the process!"

From our friends at AMI

We've had a winning partnership with the Malaghan Institute of Medical Research since 1996. Together we've raised over half a million dollars for research, and we're committed to helping them raise more with AMI Round the Bays.

We would like to say a very big thank you to everyone for their support of the Run for Research so far!

AMI Round the Bays Malaghan Run for Research Entries

If you've missed out on registering for AMI Round the Bays, the Malaghan Institute h...

Anna Board is Running for Research!