Hurricane Katrina 10 years on  the science connection in New Zealand

The world-first discovery in cell biology made by scientists based in New Zealand and Australia in 2015 might have been made a decade earlier if not for Hurricane Katrina; according to a researcher who watched as rising water and eventual power failure destroy his cell cultures at Tulane University New Orleans in late August 2005.

Scott Olson, now an Associate Professor at the University of Texas, contacted Professors Mike Berridge (Malaghan Institute) and Jiri Neuzil (Griffith University) to congratulate them on their publication in January 2015; pleased that despite the years, science had found a way through. His work was among the approximately 300 federally funded projects at New Orleans colleges and universities, cumulatively valued at more than $150 million that was set back by the destructive power of Katrina a decade ago.

Mike Berridge said of Scotts email contact, It was a wonderful gesture but typical of the scientific community.  We are competitive of course, but ultimately if we advance something that may change the way we treat disease, the research world takes notice. Defective mitochondrial DNA is known to account for around 200 diseases and is implicated in many more.

Subsequent to their discovery this year Professors Berridge and Neuzil were invited to review their work on mitochondrial transfer between cells in the prestigious Cancer Research journal. As a consequence of the 2015 paper, the focus of mitochondrial shuttling between cells has shifted from an interesting cell culture observation to a silent and stealthy physiological phenomenon with potential relevance to development, human health and disease.  Without mitochondria a cell typically dies.  Mitochondria donation could become possible in the future to restore cell health, or starve, for example, a tumour cell of the energy required to grow.

Caption: The dark field image on the left highlights the transfer of fluorescent mitochondria. The bright field on the right has sufficient light to see the connecting nanotube.

When Hurricane Katrina struck on 23 August 2005 innovative investigations into the physiological movement of mitochondria between cells were underway in Darwin Prockops laboratory at Tulane University in New Orleans. Following on from cell culture results published early in 2006 showing mitochondrial transfer from human mesenchymal stem cells to lung cancer cells without mitochondrial DNA, Scott Olson and Jeff Spees were developing similar mouse tumour cell lines, including from 4T1 breast cancer cells, and planned to inject these into immune-deficient mice to determine whether mitochondrial transfer occurred in animals. With promising results following 2 months hard work, Scotts holiday in Florida was cut short by an intensifying storm and he hastily headed for New Orleans on a rescue mission. After an all-night vigil freezing down cells, he made some hasty preparations and left as part of the general evacuation, hoping to be back in a few days. That didnt happen.

The National Institute of Health estimated, approximately 300 federally funded projects at New Orleans colleges and universities, cumulatively valued at more than $150 million, including 153 projects at Tulane and others at Louisiana State University (LSU) were impacted.  When the power went out and back-up generators failed at a Tulane laboratory, cryopreserved tissue samples collected since 1973 in the Bogalusa Heart Study thawed and became useless for all but DNA analysis.   Darwin Prockop was more fortunate, as his adult stem cell lines were recovered from storage in liquid nitrogen, but for Scott Olson; he wrote up his PhD thesis and moved on, and attempts to resurrect his project were unsuccessful.

Ten years later, Associate Professor Scott Olson received an alert when the team lead by Professor Mike Berridge of the Malaghan Institute in Wellington, New Zealand, and Professor Jiri Neuzil of the Griffith University in Queensland, Australia, had achieved a world first. 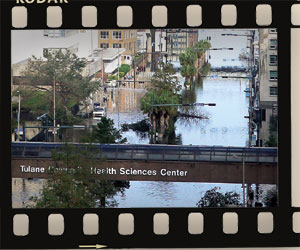