Since the Malaghan Institute first opened its doors back in 1979, it has enjoyed immense support and loyalty from the community, without which it could not operate. For three such individuals, their association with the Institute is a very personal one and in this issue of Scope we would like to acknowledge their stories of hope and survival, and their extraordinary efforts to raise funds for our research in 2009.

This is by no means an exhaustive list and we hope to bring you more stories of goodwill in future editions of Scope. Richard Barr  walked across the UK
Richard Barr is a retired physicist from New Zealand who suffers from CLL (Chronic Lymphocytic Leukaemia). In 2009 he walked 1628 km (1012miles) from John o Groats in the northeast of Scotland to Lands End in the southwest of England, to promote awareness of CLL and to raise money for research into the disease. Half of the funds raised went towards the Malaghan Institutes CLL research programme. 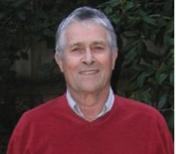 Dave Wilson  walked 3200 km around England
For Dave Wilson (pictured left), a former Taranaki man, being diagnosed with prostate cancer in his early seventies came as a shocking blow. However, Dave considers himself one of the lucky ones because two years after undergoing radiotherapy and hormone treatment he is now cancer-free. In May 2009 Dave set off from Brighton pier in England on a five month walk that covered 3200km (2000 miles). The motivation behind this venture was Daves wish to give back to the clinicians and cancer researchers that helped save his life. Another reason for Daves big walk was to promote the critical importance of early diagnosis and detection of some cancers. Dave selected the Malaghan Institute as one of the recipients of the funds raised. Kylie Archer  ran the 2009 New York Marathon
Aucklander Kylie Archer ran the 42 crazy big apple kms of the New York Marathon in memory of her Dad and the thousands of kiwis diagnosed with brain cancer every year and dedicated all of the funds raised to the Malaghan Institute.

Collectively Richards, Daves and Kylies efforts raised over $6000 for our cancer research programmes! Words cannot describe how grateful we are to these inspiring individuals for selecting the Malaghan Institute as the recipient of their incredible fundraising efforts  our sincere gratitude to you all