It is with immense pride that we congratulate Malaghan Institute Trustees Graham Malaghan and David Mossman on their respective Queens Birthday Honours.

Malaghan Institute Trust Board Chairman Graham Malaghan was recognised for his services to medical research and philanthropy by being made an Officer of the Order of Merit. While David Mossman was awarded The Queens Service Medal for services to veterinary science. Graham Malaghan is the son of Len and Ann Malaghan, the namesakes of the Malaghan Institute, and has been Chairman of the Institute's Trust Board since 1990. In December 2009 Graham was awarded an Honorary Doctorate from Victoria University of Wellington in recognition of his unfailing vision and commitment to the Institute. Graham played a pivotal role in overseeing the successful relocation of the Institute to Victoria University's Kelburn campus in 2004, where staff numbers and research programmes have flourished. Furthermore, by actively fostering relationships with other organisations and universities, Graham has championed the growth of the Institute's capital endowment fund, which will continue to support the Institute for years to come. 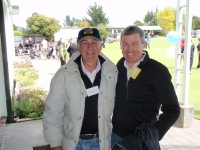 Appointed to the Trust Board in 2005 and Chairman/President of the Hawkes Bay Friends of the Malaghan Institute since 1999, David Mossman is another extraordinary individual who has worked tirelessly behind the scenes to fundraise for, and raise awareness of, the Malaghan Institute. A retired rural veterinarian since 2001, David was awarded the Australian College of Veterinary Scientists college prize in 1978 and the Coopers NZ Farm Management Award for significant innovative farm management in New Zealand in 1984. He has also been a Keynote speaker at the World Angus and Hereford Conferences.

We feel very fortunate to have Graham and David as part of the Malaghan team and offer our heartfelt congratulations to them both on receiving such distinguished awards.